Check out these fun facts about your daily office stationery 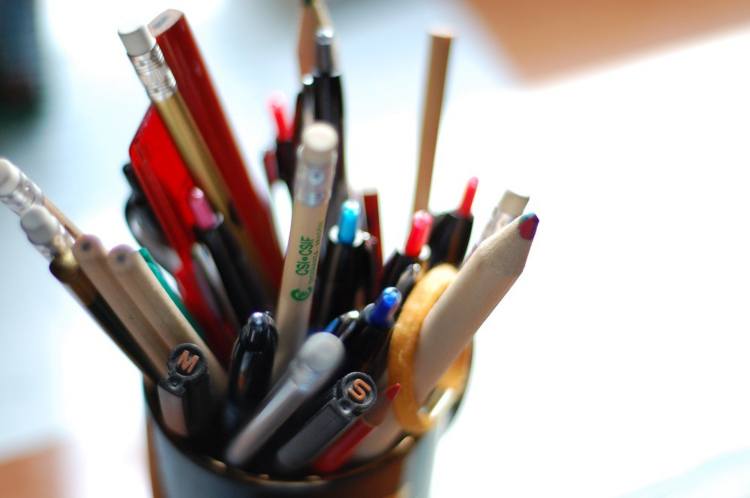 You would need 477,710 Bic ballpoint pens to draw a straight line to the moon

According to research conducted by Bic in 2008, each of their ballpoint pens can produce up to two miles of writing. As there are 238,855 miles to the moon from earth, it would require nearly half a million ballpoint pens to draw a straight line to our only natural satellite.

The pencil has been proven mightier than the pen

As a counterpoint to Bic’s research, another group decided to find out how long the typical pencil lasts. They concluded that the average lead pencil can draw a continuous line for roughly 35 miles. However, if you wish to prove this yourself, we’d advise taking your best sharpener along with you.

Paper clips were used to help fight the Nazis

During the Second World War, Norwegian resistance fighters attached a single paper clip to their lapel as a subtle indication that they were taking the fight to Hitler’s troops.

The world’s first rubber was made from stale bread

Rubbers, as we know them today, were first used around 1770 and were given their name by a man called Joseph Priestly. Yet the first known rubber for removing graphite markings was made out of stale bread. Trust us, this works – so next time you leave a loaf of Hovis in the cupboard for too long, why not give it a try?

Yellow fluorescent highlighter ink accounts for around 85% of all sales

Yellow is in the middle spectrum of visible light, and thus works well for people with colour blindness. This is one of the biggest reasons why yellow is the most popular colour of fluorescent highlighter ink. So, as Chris Martin of Coldplay fame might say, “It’s all yellow”.

Pen lids cause an average of 100 deaths a year

We all have work colleagues that spend most of the day incessantly chewing on their pen lids – heck, you might even be one of them. Unfortunately though, this habit has racked up a significant global death toll. To help people breathe, many pen manufacturers introduced a small hole in the lid to help prevent choking.

The post-it note wasn’t invented, it was created by accident

In 1968, Spencer Silver, who was an employee of 3M at the time, was trying to create a super-strong adhesive. Yet despite his best efforts, all he could come up with was a very weak adhesive that could be removed without leaving behind any residue. This accidental discovery was then used to create the world’s first post-it note.

The production of a modern laser toner cartridge requires 3.5 quarts of crude oil

Ink cartridges are made of oil, around 3.5 quarts to be precise. A quart is a little more than a litre, which is a big reason why printer ink is so expensive throughout the world.

Typists’ fingers travel up to an average of 12.6 miles each working day

This means that, on average, typists’ fingers could do nearly two-and-a-half marathons each and every working week.

The world’s first printer was invented in 1440

Okay, officially this refers to the world’s first printing press, which was invented around 1440 by Gutenberg for the Holy Roman Empire. Nonetheless, the same press-type technique is still evident in many of today’s office toner printers, which press ink onto paper from a roller rather than a flat surface.

The world’s first stapler was created for King Louis XIV

The first stapler known to man was created for the king of France during the 18th Century. Not only that, but according to records, each staple was inscribed with an insignia of the royal court – which is all very fancy, even by the opulent standards set by France’s royal families.

In the UK, 45 million ink cartridges are sent to land-fill sites a year

To help you visualise this fact, that is enough ink cartridges to stretch the length of Hadrian’s Wall (73 miles) 15 times. Or, alternatively, to cover the football pitch at Manchester United’s ground, Old Trafford, 17 times.

The world’s most expensive pen sold for $8 million

The Fulgor Nocturnus, manufactured by the famous Florence pen makers Tibaldi, sold for $8million dollars at a Shanghai auction in 2010. Are you asking yourself how? Well, the pen is decorated with 945 black diamonds, 123 rubies and, quite frankly, some people are just crazy.

If everyone in UK offices saved one staple a day, it would equate to 72 tonnes of metal each year!

72 tonnes in metal weighs more than two and a bit train carriages, which is a lot of metal.